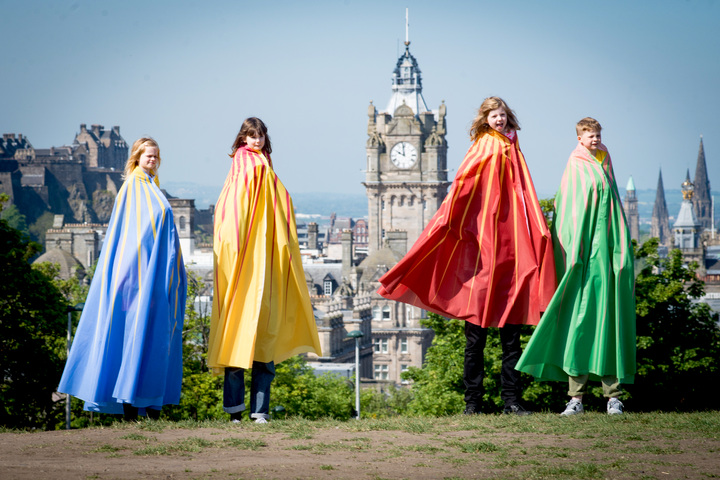 In January 2017, Mamoru took part in the Gender Lab hosted by Imaginate in Edinburgh. Since then he has been working on a participatory project called ‘The Tallest’. Mamoru was seeking a collborative artist when he bumped into Robbie when he was just back from (over)Protection Lab.

“The original idea behind The Tallest was simple. A child (3yrs+) sits on an adult’s shoulders, and they get wrapped in a specially-designed cape. Then voila!, they become a very tall person (7’ or over!) with a small child’s head.

The Tallest was originally made for a family festival at Tate Britain. I created this project in order to offer a new perspective for children, as they typically see artworks from a very low viewpoint. What if they suddenly get an opportunity to appreciate sculptures - Henry Moore’s on this occasion - from a height that even adults cannot reach? The Tallest gave the children a new sense of ownership of the artworks and a new sense agency within themselves.

The project was also shown at the Grand Hall of the National Museum of Scotland for the Edinburgh International Children’s Festival Opening Weekend in 2017. Through the two opportunities, I realised that The Tallest permits a powerfully surreal landscape to emerge, particularly when several ‘Tallestians’ are roaming around in the space.

A desire to collaborate with an artist who has a strong insight into body movement and choreography grew in me. I bumped into Robbie Synge soon after he had participated PUSH (over)Protection Lab in Hasselt, Belgium. He already knew about The Tallest and said he was interested to join the project to explore its further possibilities, specifically from the viewpoints of adult/child relationship and the various risks within this activity.

We were extremely lucky to receive support from Imaginate who programmed The Tallest again for Edinburgh International Children's Festival Opening Weekend as well as securing further opportunities at Hidden Door Festival (Edinburgh) and Merchants City Festival (Glasgow). The support also allowed Robbie and I to spend time together to share what we would like to focus on in these presentations:

Based on all the above, we tried out many small ideas at the Opening Weekend and Hidden Door. Some worked and some didn’t. But both of us felt we had learned a lot and were convinced that there is a huge potential in developing The Tallest into something that is more playful, fun and insightful for both participants and spectators.

We have more forthcoming opportunities in the next few months and will seek more in the future. It will be a long-term development and we both look forward to it.”

The Tallest trailer from PUSH EU on Vimeo.