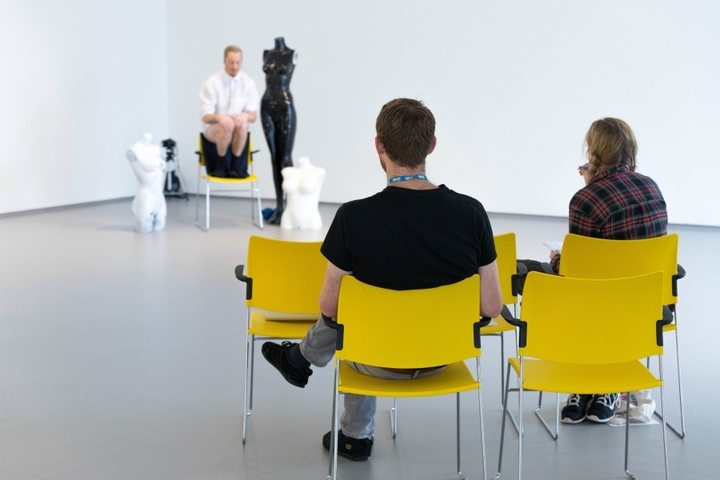 The world is evolving far more quickly than we can process.  Akin to understanding mathematics, the instant we grasp a simple concept that helps us navigate the world exceptions become apparent, rules are gradually deconstructed or exposed as mistruths and will eventually be accepted as oversimplifications.

Mathematician John von Neumann said, 'If people do not believe that mathematics is simple, it is only because they do not realize how complicated life is,' a philosophy that arguably underpins great theatre: performance created by tested methods, offering simplified versions of reality that generate space for people to process the complexity of their own life or experience new perspectives.

In westernised cultures, our understanding of gender has fallen victim to oversimplification by operating in a binary for centuries.  In Scotland it was only earlier this century (2004) that initial steps were taken towards developing a satisfactory Gender Recognition Act for transwomen and transmen, and it has taken until 2018 for parliament to even consider reform that includes legal recognition of non-binary identities.

Nevertheless, in both 2015 and 2016 Scotland was recognised as the best country in Europe for LGBTI legal equality by the Rainbow Europe Index.  Arguably, this is also a casualty of oversimplification as it measures legislative equality based upon gender and sexuality.  Although inextricably linked, what would happen if we focussed on equality across the gender spectrum – would Scotland score so highly?

A similar question could be asked of mainstream LGBTQI visibility.  For example, prominent media organisation GLAAD stated that LGBTQI visibility on US television will peak in the 2018-2019 season, moving towards improved intersectional representation with characters of colour counting for 50% of the LGBTQI characters broadcast, however gender parity is still lagging with non-binary characters making up only 1% of those shown.

In particular, theatre for young audiences creates space where we can propose progressive values and translate the experiences of others to the next generation of citizens, leaders and decision makers in the hope of creating a more empathetic world.

In my 2016 work, Experts In Short Trousers, I explored three concepts central to my work: children as the experts of their world, accepting perceived otherness and empathy.

As a group of crash-landed aliens, the characters were created with a non-binary gender identity working to ensure that our behavioural choices were not influenced by an unconscious gender bias: we were all nurturing but rowdy; each of us had pragmatic moments and ditzy moments; the alien language we created offered only gender neutral pronouns; we offered the same physical nuances; leadership was fluid between the cast and costumes were purposefully designed to cover hair, with our only make up some colourful circles of face paint.

Notedly, these are tiny gestures towards tackling gendered assumptions in theatre, but they were a considered part of the process.

However, in almost all of the 30+ performances I would witness an adult correct a child who, in their eyes, had mis-gendered a performer.  In spite of our best efforts as a creative team, the binaries of the world in which the attending adults grew up created the context for the work and presumably the language they will use to help the young audience remember the performance.

However tiny in socio-political terms, these considerations of gender were a significant part of the process but is it really enough to challenge gender normativity by stealth when this quiet work is so easily over ridden by the world being presented to children out with the theatre?  Should we have done more to support, challenge and sometimes confront those who influence our young audiences before, during and after engaging in a performance? Did these small considerations of gendered behaviour have any cultural impact?  Was this part of the process simply virtue signalling?

In my role as a movement director, I ask similar questions in the rehearsal room of the representation of women on stage.  Of mathematics, George Cantor said, ‘the art of proposing a question must be held of higher value than solving it’.  However, I often face frustrations as the gendered ‘micro-tropes’ that I attempt to challenge are dismissed by patriarchal, not always male, directors unwilling to ask these questions of their own work or who feel that there is not enough time to ask such a seemingly minor question.  Where do you go when the question you propose can be so easily ignored?

Micro-tropes of women I often experience include all of the central female roles being weepy, women being referred to as girls whilst men are referred to as men and young female teenagers being bitchy.  I know that this experience is nothing new.

Although not always a solution, when creating work with youth theatres or companies of young people, if I feel that the creative team do not see the issue with these micro-tropes, I become less stealthy and will ask questions directly in front of the young people.  This can make me feel uncomfortable and at times can feel as if I am undermining the director but if I quietly let the narrative tropes continue, I am part of the problem.  What if a better version of stealth is about getting in the room and then being explicit in spite of it feeling uncomfortable?

Whenever I doubt this approach, I am reminded how effective it is when I see how many young people’s faces change as they have a black swan moment and begin to see the gendered narratives they are quietly fed through mainstream media or sadly often in the theatre they are central to creating.  I have had young women approach me to say thank you because their gut had told them the monologue they were being asked to read didn’t sit well with them but they could not yet articulate why.  I have seen groups of young people positively begin to use they/ them pronouns for peers who have never been given the space to self-identify and the confidence that grows out of being seen and sadly I have seen young male directors frustrated when their creative authority is brought into question – a stark reminder of the cycle we are perpetuating by allowing these micro-tropes and the behaviours that support them.

For this level of visibility to become a reality in theatre for young audiences (and in the theatre made for the adults that contextualise their lives) stealth is not enough, we have too much work to do.  It is about creating a gender balance in the practitioners being resourced to tell stories, the narratives being explored and ensuring equal distribution of the work they make.  We do not need to strive for this, we could do it tomorrow if we were all willing to educate ourselves, call each other in, sacrifice our egos and feel a little uncomfortable as we make mistakes but work to rectify them.

It is not lost on me that in writing this article I have quoted three middle class white men arguably born into families with connections to their chosen field – a less fortunate link between mathematics and theatre perhaps?  I cannot speak for how maths is choosing to address gender imbalance within the field and would not want to summarise how or even if theatre is choosing to do this.  However, from the number of conversations being undertaken I still have hope that there is the drive to do so, but the pace is painfully slow.  The world is evolving far more quickly than we can process and if as theatre makers we see ourselves as social commentators or a tool for audiences to processing new perspectives, it is time we start to move more quickly and with far less stealth.

Emma Park wrote this article as part of her response to taking part in the PUSH Gender Lab in Edinburgh, Scotland in January 2017.  The articles was commissioned by Imaginate. Emma Jayne Park explores socio-political performance under the creative handle Cultured Mongrel, building safe spaces for interrogation. Cultured Mongrel 'High octane... energetic, witty and playful' (The Skinny),