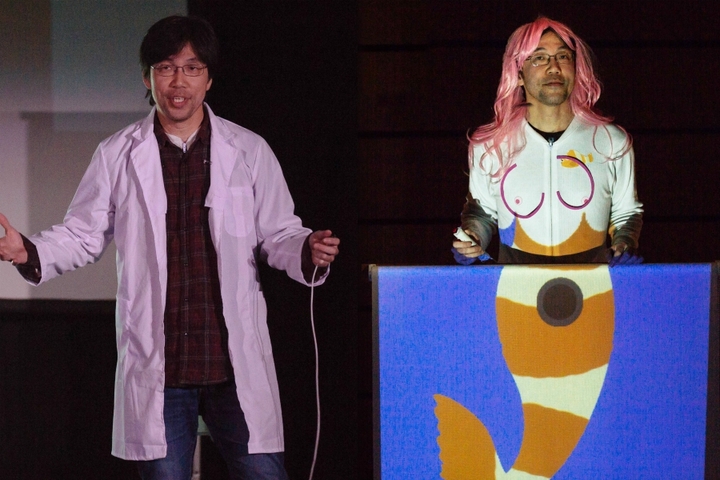 Mamoru Iriguchi has been developing a new performance idea for teenagers called S.E.X. inspired by the PUSH Gender Lab which has been supported by various organisations including receiving funding from The Culture Project Fund (through The City of Edinburgh Council in partnership with The Royal Edinburgh Military Tattoo).

Sex Education Xtreme will be an entertaining and informative show made with and for young people aged 12-15 years old about gender and sexuality. It explores how we (Homo Sapiens) have evolved to have two sexes and why, despite of that, our gender identities and sexuality are so diverse.  S.E.X. will take young audience to a journey through a mesmerising world of sex, gender and sexuality in humans as well as in nature. With playful DIY use of video technology, S.E.X. will powerfully encourages everyone to celebrate their self-identified gender identities and sexual orientation.

S.E.X. was inspired and informed by PUSH Gender Lab that I participated in 2017. PUSH was a 2-year project facilitated by five European partners including Imaginate to ‘push’ challenging subject matters in theatre and dance for children and young people.

Since then, we received supports from a number of organisations including Imaginate, Edinburgh City Council, The Royal Edinburgh Military Tattoo, Marlborough Theatre (Brighton) and Platform (Glasgow). The support helped me work with artists including Ivor, James Ley and Eoin McKenzie and involve Independent Arts Projects in producing the project. We created a few work-in-progress versions for opportunities including Ideas Exchange (Imaginate), Brighton Fringe, Rainbow Playground (Manchester) and received positive remarks such as:

“Utterly hilarious, while touching on serious themes, it was a masterclass in prop, costume and media-heavy performance art. Despite still being in development, this piece is the start of wonderfully worked cabaret lecture and a work to watch for in the future.” (Exeunt Magazine)

“It’s lovely to watch a show about reproduction and the history of gender that’s as queer as can be and still be fun... The use of costume, media, tech and projections, live, pre-recorded and interactive filmed bits between...all brings to light the cunning mind behind the on stage charm and the easy informative way this informed and educated ex-zoologist shares his interests.” (G Scene)

Additionally, we had a crucial opportunity to share the work-in-progress fragments with young people of the target ages at Platform. We received both positive responses, constructive criticism from them. They also expressed awkward feelings. This is the moment when it became clear that this work needs to be made. We are also aware (through work-in-progress presentations) that touring this piece in theatres does not necessarily achieve the desired exposure as parents/guardians or teenagers themselves might not buy tickets to a show that has ‘sex’ in the title. Our conclusion was that S.E.X. has to go straight into secondary schools. But how?

Imaginate helped us meet appropriate organisations such as Education Scotland and Theatre in Schools Scotland for further advice. We learned that secondary schools are trickier (than primaries) to bring theatrical work to as it is hard for teachers to agree to gather a few classes to a school hall at the same time. Based on this, we strategically decided that we would produce two versions of S.E.X.; one that perfectly fits a class (both in terms of length and space) that allows us to do a few performances on one day, and the other that works best in a bigger space (black box studio) with appropriate lighting and sound.

With this borne in mind, S.E.X. was introduced at this year’s Early Dialogue Day at Federation of Scottish Theatre’s Emporium where it drew interests from a number of venues and organisations. In addition, Fiona introduced us to Edinburgh International Festival who were seeking artists to be involved in their new school residency programme at Leith Academy.  We now have Edinburgh International Festival (EIF), Eden Court (Inverness) and Platform (Glasgow) as our prominent supporters of the development who will connect the S.E.X. Team with their local secondary schools to share the development.

We are currently awaiting the decision from Creative Scotland to undertake the crucial development stages to work with young people, then to finalise the production in 2020.